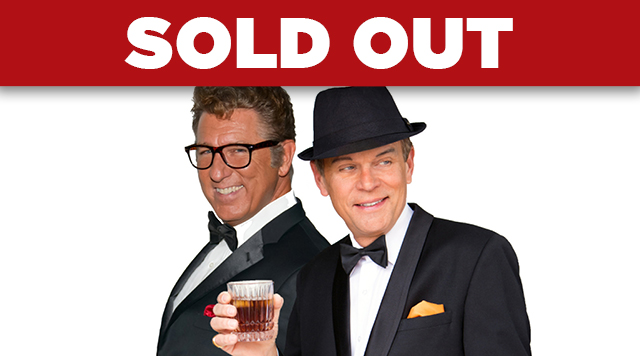 FEATURING ROBBIE HOWARD AND TOM STEVENS
February 4, 2023 • 8:00pm Suncoast Showroom Tickets from $24.95 Buy Tickets(Opens in a new window)
BE AMAZED AND ENTERTAINED BY THIS PAIR OF WORLD CLASS IMPERSONATORS, COMEDIANS AND SINGERS!

Robbie Howard
A native of Los Angeles California, Mr. Howard began his career in television with dozens of national commercials, and guest starring in General Hospital, Days of Our Lives, Growing Pains, and Perfect Strangers.  He has been headlining acts in Las Vegas for more than ten years, and never fails to offer a refreshing alternative to the colored lights and  fleeting fads that come and go.

His hit shows “Hurray America” and “Stars of the Strip” sold out for over a decade in Las Vegas. He is a cast member of Legends in Concert, The Rat Pack is Back, and The Price is Right Live!
His impressive list of corporate clients includes Sony, Marantz, Kentucky Fried Chicken, McDonalds, and numerous others.

Tom Stevens
The charismatic Tom Stevens is heralded by his growing legion of fans as the best singer-impressionist performing today. His enchanting show has garnered the reputation as the Las Vegas show that audiences want to return to again and again.

A native New Yorker, Tom Stevens began his career appearing in clubs on the East Coast. His incredible likeness of Dean's looks and crooning abilities were put to the true test when he performed at the fourth annual Dean Martin Festival in Dean's hometown, Steubenville, Ohio. The overwhelming response to Tom's impression from not only Dino's fans, but the people who knew Dean when he was Dino Crocetti, provided Tom with return engagements to headline the festival for all the years to come.

Must be 21 years or older. Management reserves all rights